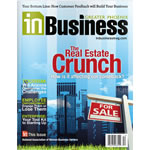 The company’s upcoming 25th anniversary and a recent string of awards are solid validation of the pioneering concept on which Jerry Mills, founder and chief executive officer of Phoenix-based B2B CFO, founded his company.

The company’s upcoming 25th anniversary and a recent string of awards are solid validation of the pioneering concept on which Jerry Mills, founder and chief executive officer of Phoenix-based B2B CFO, founded his company.

Back in the mid-1980s, while he was a manager with Arthur Andersen & Company, Mills came up with the idea of creating a company that would provide CFO services to small and mid-market companies, offering business owners solutions that would help improve any cash flow issues as well as the overall organization of the company.

To support his theories, Mills developed a model of micro- and macro-economics that looked at the concept of “typical consulting” as it related to the point of diminishing marginal returns. His idea was to help alleviate the stress levels of business owners while simultaneously improving their sales and profits through the services of a part-time CFO. But when he pitched the concept of CFO services to his co-workers, he recalls, they weren’t as excited about it as he was. “It just wasn’t what they did at Arthur Andersen,” Mills says. “They concentrated mainly on audits and tax returns, and so this just didn’t fit in with the type of work that they did.”

Undaunted, Mills decided to launch his own company based on his theories and research. “I thought it was a great idea, so I did it solely on my own,” he says. But before he officially opened for business in 1987, Mills realized he needed to get some experience working in the field he was going to promote. “I thought if I was going to sell CFO services, I should be a CFO, so for two years I did what I could to learn the industry,” he relates. “After two years, I turned my employer into my first client.”

Getting that job wasn’t hard — he’d been a manager at Arthur Anderson and in those days such a person was in high demand. He found the job more complicated than the public accounting he’d done formerly. “As CFO, you make the company more efficient as a process of doing your job — policies, procedures, streamlining, training people,” he explains. It was a reality that confirmed the concept which underlies B2B CFO. So after a couple of years, he says he “went to the owner and said, ‘I’ve got this thing streamlined. I don’t think you need me full time. I think you need me, but maybe just a couple days a week.’”

Mills’ proposal was to become an independent contractor with that company, telling the owner, “I’ll continue to supervise the controller. I’ll be here when you want to meet with the banks, your attorneys, CPAs, pension administrator. Whenever you want to chat about anything, just call me. I’ll come over.” He recalls the owner had a few questions, but took only about half an hour to make the decision to accept.

Mills concedes it was a difficult industry to learn. In fact, it wasn’t until he had been in business for about 14 years that he really thought he had it down. “I believe in what I call the ‘10,000-hour rule,’ which means that to learn a skill and be at a genius level you must put in this amount of work. I figure that between 1987 and 2001, I put in my 10,000 hours.”

Although he intended to be a sole proprietor in his business, by the late 1990s Mills started adding other executives to join his company. By December 2001, he had just over 200 people in his firm.

Mills’ concept answered a need among the CFO professionals. As he’d discovered, a CFO performing his job makes a company more efficient to the point where it no longer needs his full-time services. “They average three years or less in a job, and a year and a half in-between jobs,” he says, noting job insecurity is tremendous — even more so for those above age 50, although, says Mills, the age discrimination is covertly couched in such phrases as “not fitting in with the company.” So he was able to tap into an available talent pool, bringing on board CFO professionals with at least 20 years’ experience.

In March of 2012, B2B CFO will celebrate 25 years in business and its success as the leading provider of financial and strategic solutions to small and mid-market companies. Although the model has not changed since he first launched his company, what has changed is the way the company now builds its visibility. “My company’s success has definitely exceeded my expectations,” Mills says. “I was a pioneer in that I created an idea and I perfected it. But I could also not be where I am today if I hadn’t made the decision in 2002 to learn to use technology, search engines and, now, social media.”

Currently, the 200 B2B partners serve more than 750 clients with combined annual sales of around $5 billion. Companies all around the country have used B2B CFO to solve their problems with cash flow and increase their profitability. The company is the nation’s largest CFO firm.